In a time where camera manufacturers are pushing 165 fps, 3240 zigapixels (ok I’m exaggerating…), there might be a more sere option: The Holga. In this article Lorraine Healy explores the streets with her toy film camera.

From the moment I got my first 35mm camera, back in my native Argentina in my late teens, I felt drawn to street photography. I had grown up in Buenos Aires when little kids took the public bus or subway alone to get to school or spent a couple hours on a suburban train going to play sports, and nobody would worry about it. With a camera in hand, I naturally associated that sense of freedom with the rich urban universe I had witnessed since I could remember. Fare money, a roll of film, and I was good to go.

In 2002, already living in the U.S., my mentor gave me a Holga S camera, the first model: a basic medium format plastic box that needed to be taped so the back would not fall off while you were shooting. She said, “I think you’re really going to like this.” She was right—boy, was she ever right! In my life as a photographer, there has been a before and after the Holga.

One of the key elements of the Holga that my friend knew I would love was this: the shutter and the winder are not connected. This camera was so simple, so basic, some would say so primitive, that you could actually decide how much or how little of the frame you were going to advance after taking a shot. This allowed for superimpositions in camera, the result being almost diptychs to panoramas, double exposures, mirrored exposures, all of them always different.

The image above was one of my first Holgapans that worked. You can see there is a consistent light leak throughout: these were the days before I had learned to tape inside the body of the Holga at some key points to avoid the darned things. But this was the shot when I said to myself, “sold!” I still cannot look at this image with that disembodied leg disappearing into the next frame without smiling.

A lot of people disparage the world of plastic or toy cameras as either a gimmick or a hip affectation. The Holga, the Diana, old vintage thrift store finds, Lomography products—yeah, yeah, yeah, hipsters wanting to be cool and the nostalgia just as easily achieved with an Instagram filter.

In my own street work, the Holga has given me not just a different look, but also a way of exploration into a deeper truth about urban life: its chaotic bombardment of noise and visual stimuli as well as the islands of Zen-like tranquility. With a Holga N medium format camera you get 12 6×6 shots (my preference) or 16 4.5×6 shots, so in other words: not so many. However, a Holga N retails for about $30.

Yes, the days of cheap film are over and a medium format roll will cost you $8 for the roll and maybe another $8-10 for developing. But a $30 camera? Who is to stop you from buying two or a dozen, loading them up with expired film from your freezer, and going out to shoot until your hands stop working?! 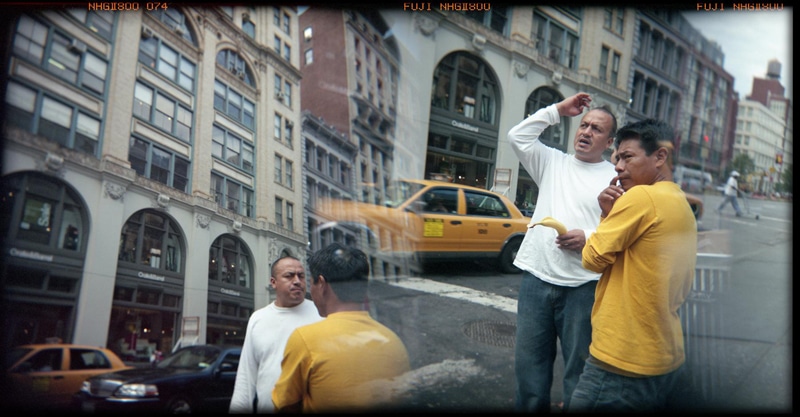 One of my favorite things in the world is going out on a street, familiar or new, with two or three Holgas loaded up and stuffed into my pockets. And then taking them out randomly, advancing the film maybe a full frame, maybe less, take another one out, shoot, advance, keep walking. Pretty soon I have no idea which image I shot with which Holga. I get to see the random results when I get the long strip of film, uncut, back from the lab. Like this one, on a long walk from Washington Square to beyond Chinatown in Manhattan.

With a little bit of practice, it is a cinch to shoot a Holga from the hip, or the neck, or the top of the table at a café. The camera looks so out of date, so blatantly plastic, so unlike a sleek digital that you are afforded instant invisibility. People might do a slight double take and wonder “is this person taking my….? Nah” and they dismiss you right away. I think these guys at a Parisian café probably were on to me as I slid by, Holga in hand shooting away. But then, if you are a Parisian guy hanging out at a café you are probably used to having your picture taken. 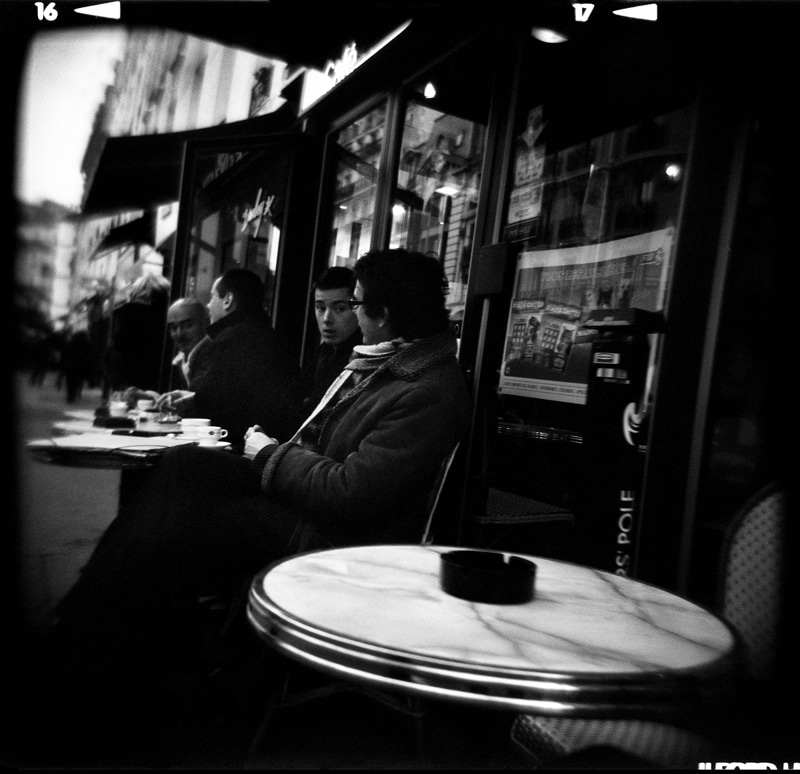 Traveling with a stack of Holga cameras is a pleasure. You can take them apart and put them in your checked suitcase because, guaranteed, nobody will be interested in swiping them. You will have to carry your 120 film with you in your carry-on, to avoid it being cooked by X-rays, which brings us to the issue of which film?

The printed sheet of paper that comes with your newly-purchased Holga, purporting to be an instruction manual, will tell you to always use 400 iso film or faster. The Holga plastic lens offers a real single aperture somewhere between f8 and f11 (some say f9-f13), a shutter speed of about 1/100 sec, and four focusing distances from “close-up” (say, 3ft) to infinity. In most situations, 400 iso, whether color or B&W, will be your best friend.

However, there are some places in the world where the light is way too bright for 400, even with a Holga. I have had entire rolls blown out beyond any software’s capacity of highlight recovery, shooting under sunny conditions in Northern Argentina, for example. The best advice I can give you is to invest a little money and get a variety of films (slide, color and B&W negative) in a variety of speeds. Especially if you are going to be traveling with your Holgas, it pays to be prepared for whatever kind of light you might encounter.

800 iso works really well in early morning shoots or interiors without a lot of light (a city market, for example), but it is getting harder to find. Fuji has stopped manufacturing its beautiful 120 800 film, although you can still get some on eBay. For night shooting, Ilford 3200 achieves remarkable results.

Newer Holga models have a Bulb setting, too, so a faster film combined with a longer exposure can give you fantastic images even in very dark settings. Just be advised that, when traveling on planes with roll film, any iso higher than 800 will get zapped. So if you are taking some 3200 film on your trip, ask for a hand inspection. Ask nicely!

At this point you might be asking yourself, is it worth the hassle? Changing 120 rolls after 12 takes, airport X-ray machines, Gaffer’s tape, when I can just slip my Fujifilm X100s into my jacket pocket and be all set? Well, I do both. Take my X100s, which I adore, and a bunch of Holgas. And my iPhone. Then I’m ready. And back a few years ago, when I could carry a bit more weight around than I’m able to now, my 1953 Yashica 124 TLR would have been around my neck too. I’ll still take it on a road trip, the car doesn’t care how many cameras I load.

As photographers, we know cameras are tools. I was always happy to shoot with decent cameras with decent lenses but never owned a first class piece of glass until I got the X100s two years ago. I’ve always been rather clumsy with my cameras and the idea of spending a small fortune on a lens only to have it scratched or messed-up on a trip was terrifying. Enter the Holga: first thing I do, when a new one comes in the door, is throw away the lens cap. I have shot some of my Holgas so much that their shutters simply give up the ghost. Then they become pinholes.

If there is anything I’ve learned in all these years shooting with Holgas is that the “plastic/toy camera” look alone won’t cut it—the general softness of the image, heavy vignetting, the ethereal feel are just not enough. Gesture, serendipity, and the kind of “good luck” that comes from doing it thousands of time: those are the things that count. 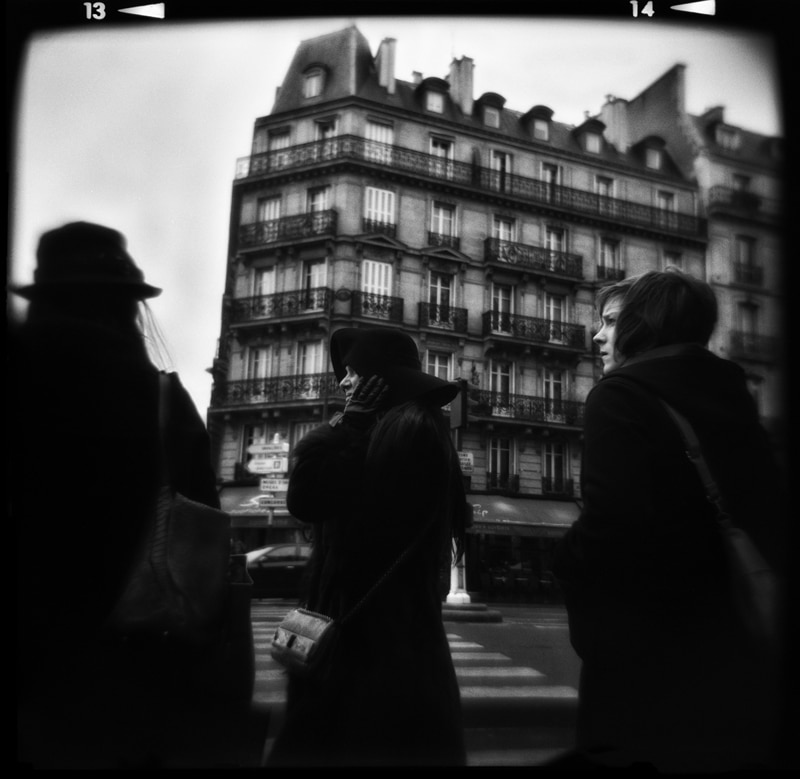 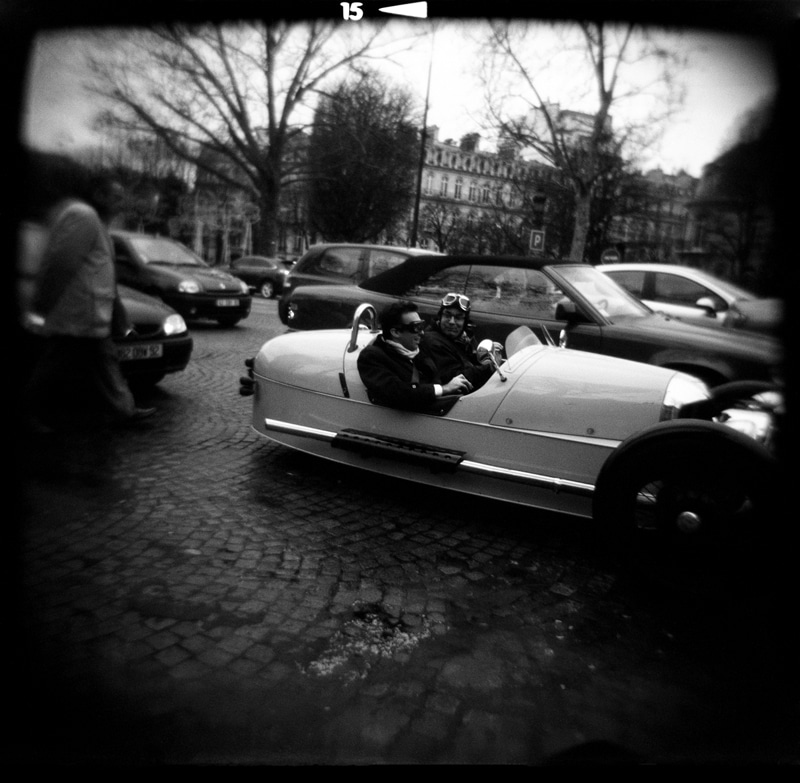 I happen to think that great vivid color is next to godliness, so I don’t really mind if a shot like the one below has a slight blur caused by the man walking forward. The finger pointing like a gun exactly at his belly, the wacky background provided by the graffiti playing against the man’s introspection, even the fact that the film had been in the freezer for a long time and clearly the numbers from the protective paper bled into the emulsion itself (see the 8s on his sleeve), all make this an image I treasure. I agree with what Chilean photographer Chris Leskovsek wrote on a recent post here, [street] photography does not need to be perfect. 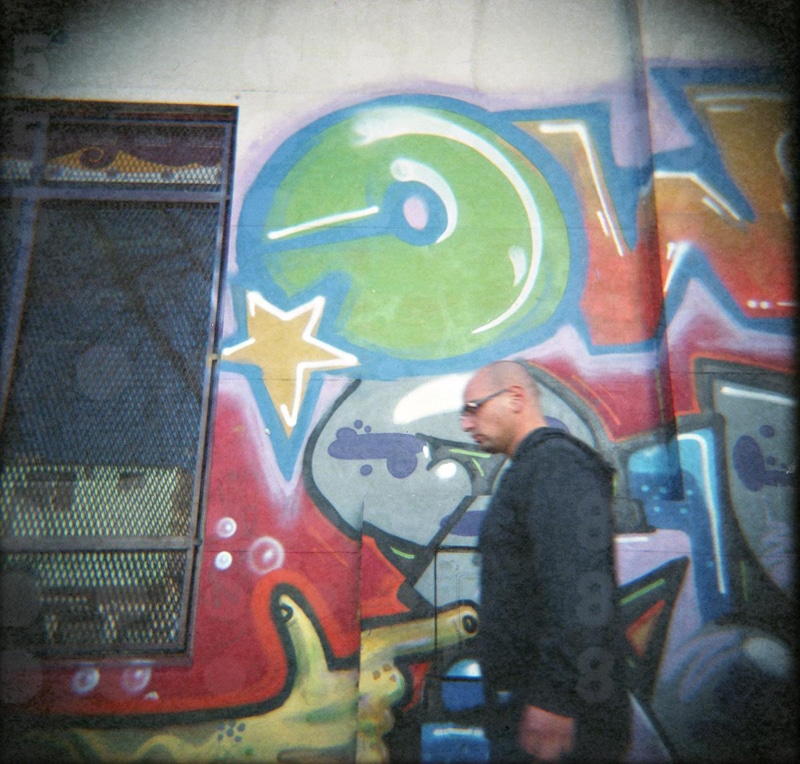 What does a photograph need to be, then? Entire libraries have been written on this and it exceeds the scope of this article. But I like Gerry Badger’s concept of ‘thereness’, a heightened sense of the subject, which he couples with the idea of the time machine. In “The Pleasure of Good Photographs,” he suggests that a successful photograph is not only one that conveys ‘thereness,’ but also an image that transports you to ‘when.’

The shot below was taken in the Tuscan town of San Gimigniano, Italy, in the summer of 2005. If you looked at it closely, you could swear it had been taken 80, a 100 years before. If I showed you the entire negative, you would see that this image is a crop of the top right hand corner of the image, maybe 40% of the entire negative.

The part I cropped out was hopelessly overblown and it showed a souvenir shop like the ones you see all over Tuscany: pieces of pottery edging the door, wine bottles, postcard stand. On the shadow side of the street was this scene. We were actually, the two women in the frame and myself, looking for the public restrooms, which were at the end of the street. 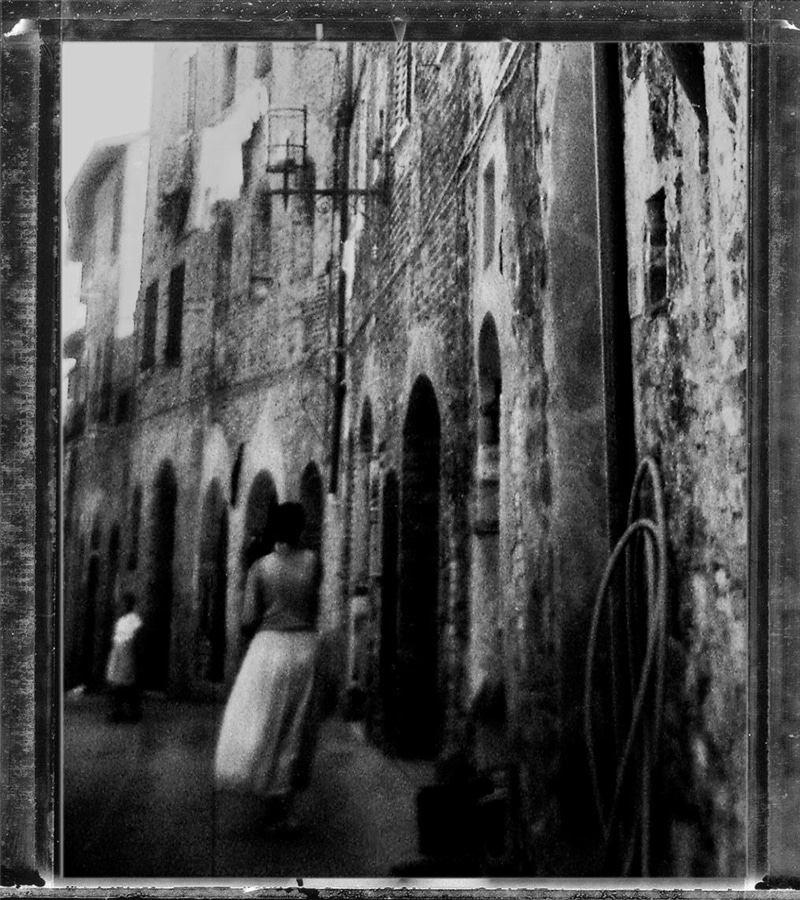 I believe this image has a lot of ‘thereness’ and a deceiving sense of ‘when,’ although I did not set out to achieve that. The graininess of the film combined with the lack of sharpness of the Holga plastic lens created the sense of timelessness helped by the unmistakably medieval background of San Gimigniano. Because of the crop I didn’t have the usual film edges that I like to keep so I added a Kubota frame that I like a lot.

As photographers, we get accused of being too obsessive, too light-oriented, addicted to gear, desperate to keep all variables under our control. But if you love street photography, maybe not so much. Because you have to be willing to be surprised by what will meet you there, perhaps street photographers are a more flexible bunch. Street photography with a Holga is a way of truly letting go: choose the film you think best fits the light and situation and that’s it. Then prepare yourself for waiting by the mailbox until that magic roll comes back ready to be scanned.

For a more throughout guide on Holgas, check out Lorraine’s kindle book “Tricks with a plastic wonder“

3 thoughts on “Street Photography with a Holga”