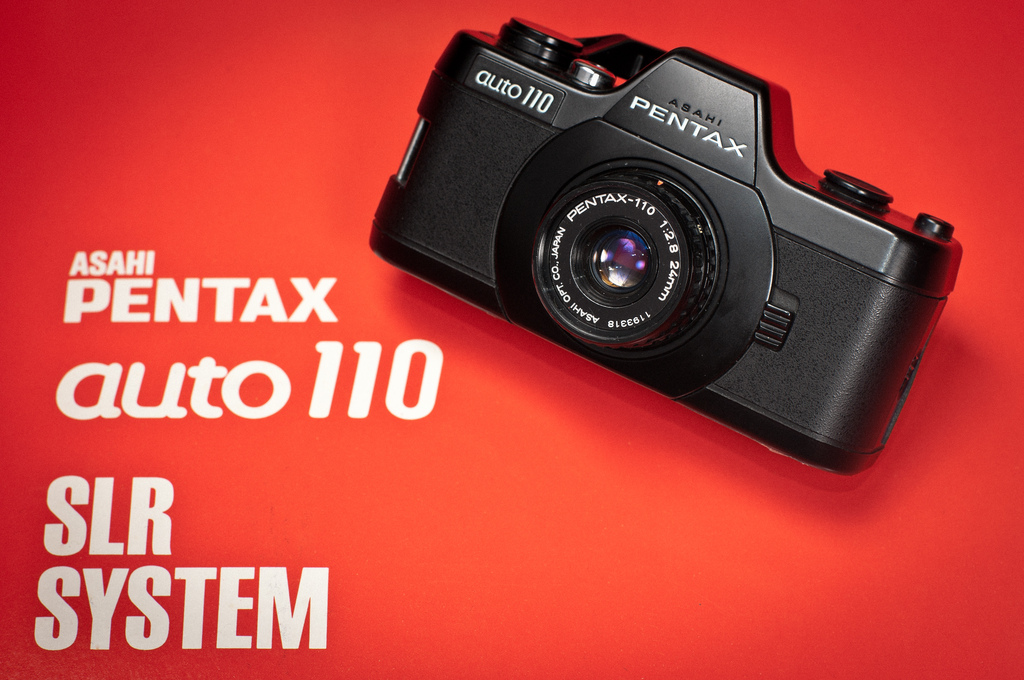 The 110 format, the little film with the Mickey ears was always considered a non serious format. With very few exeptions most of the cameras that were made for it were toy cameras like bugs bunny or Ninja Turtles. I personally remember my Ninja Turtles red camera which had a graphic of a Ninja Turtle imposed over the image. This camera along with many others were fixed focal lenght and fixed focus and had many licensed characters on them.

But along came Pentax that made a whole SLR system with 110 film in 1978. Believe it or not this little system had 6 lenses! On ebay you can find the whole system for around $375.  Some accessories include flash, motor drive, a teleconverter, and belt clips. 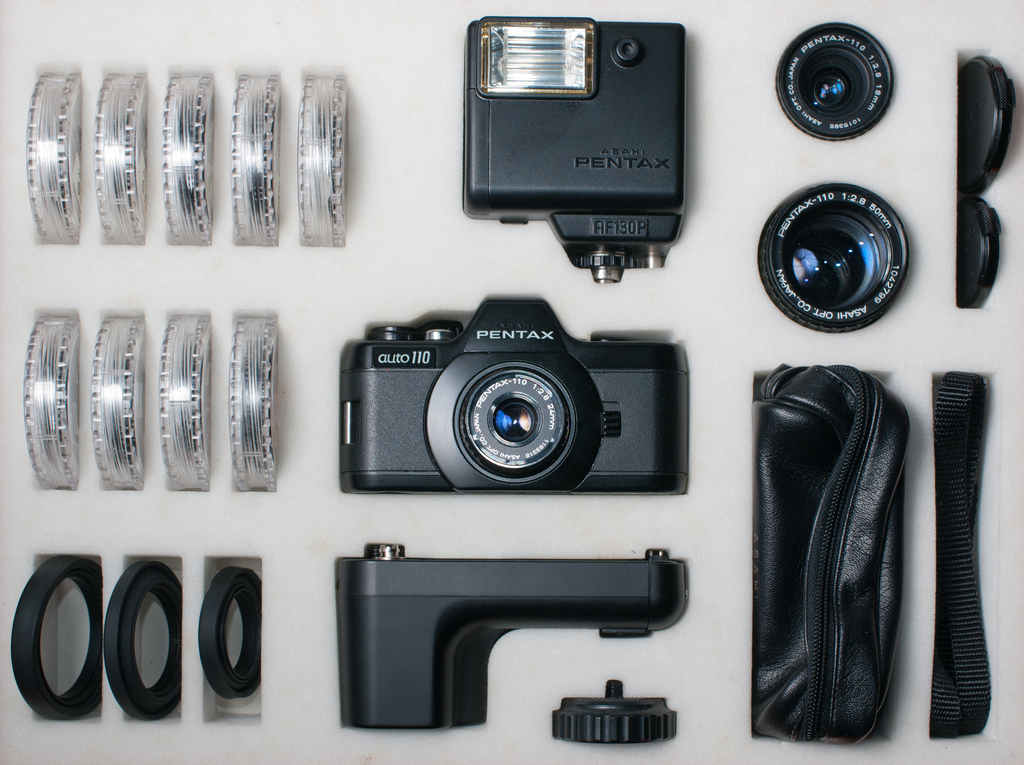 This little camera only had auto exposure but it is an incredibly FUN camera to the MAX. It slips in your pocket and you barely remember it is there, it’s fun to use, you simply point, focus and shoot and it slips back in your pocket. Of course people think that it’s a toy but this little camera means business. It is downright cute with it’s little viewfinder and clocking lever but the lenses are serious optics unlike other 110 cameras at the time.

There was another Pentax 110 camera made, the Pentax Auto 110 Super which included improvements like single film advance, a 1.5EV+ compensation button, etc. It goes of course for a higher price but both cameras are great in their own right. 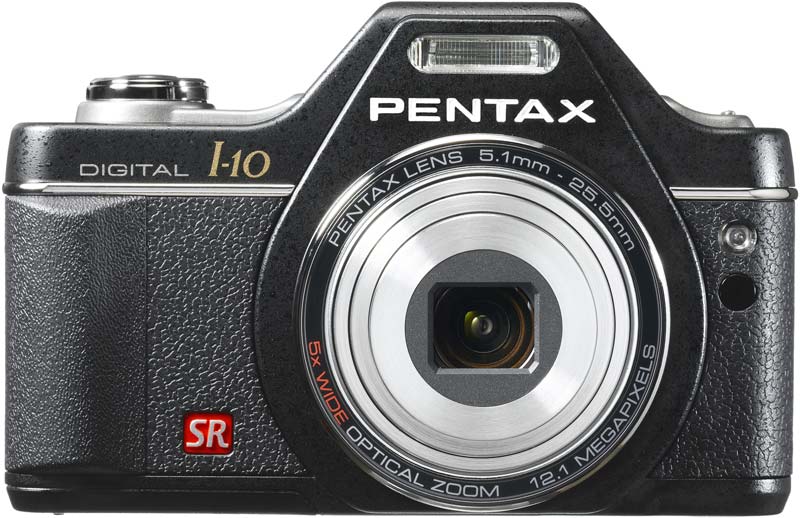 Pentax released a digital camera called the Pentax Optio i10 that is reminiscent of the auto 110, even mimicking the viewfinder bump. While it has the looks of the Auto 110 it’s really not the same thing. It’s not as fun and ends up being a P&S even though it never claimed to be anything else.

The Pentax Q is the true successor of the Auto 110 but has none of the looks. The lenses fair nicely on the Q as you can see in this flickr set.

The Auto 110 is a unique camera and one of the mot fun I have ever used. You can get your hands on the Pentax subminiature SLR for around $35 on ebay. The only issue is film cost. 110 film costs a lot because it was discontinued, it goes for around $10 per roll not even talking about development, this can really burn a hole in your pocket. The subclub sells specialty cutters to cut 35mm in half so that you can re-spool a the cassette.

I no longer have my Auto 110 but I have a project in mind that would be called 110 Japan, where I would take many photographs with the Auto 110 and scan the whole film strip and have a long horizontal image to view online.

Impressively, the 110 lenses can be fitted to NEX cameras (or other APSC sensors if you can find the adapter) and Micro 43 cameras. The image circle is pretty big but there is some nice vignetting around the images. The lenses Bokeh real nice and are sharp. Since they are bargain priced they are fun lenses to have and are extremely small. Of course these types of lenses are easier to focus on a camera equipped with focus peaking like the NEX cameras. The most interesting lens of the lineup in y opinion is the 70mm 2.8, and some Pentax users sometimes equals their quality to the limited lenses. 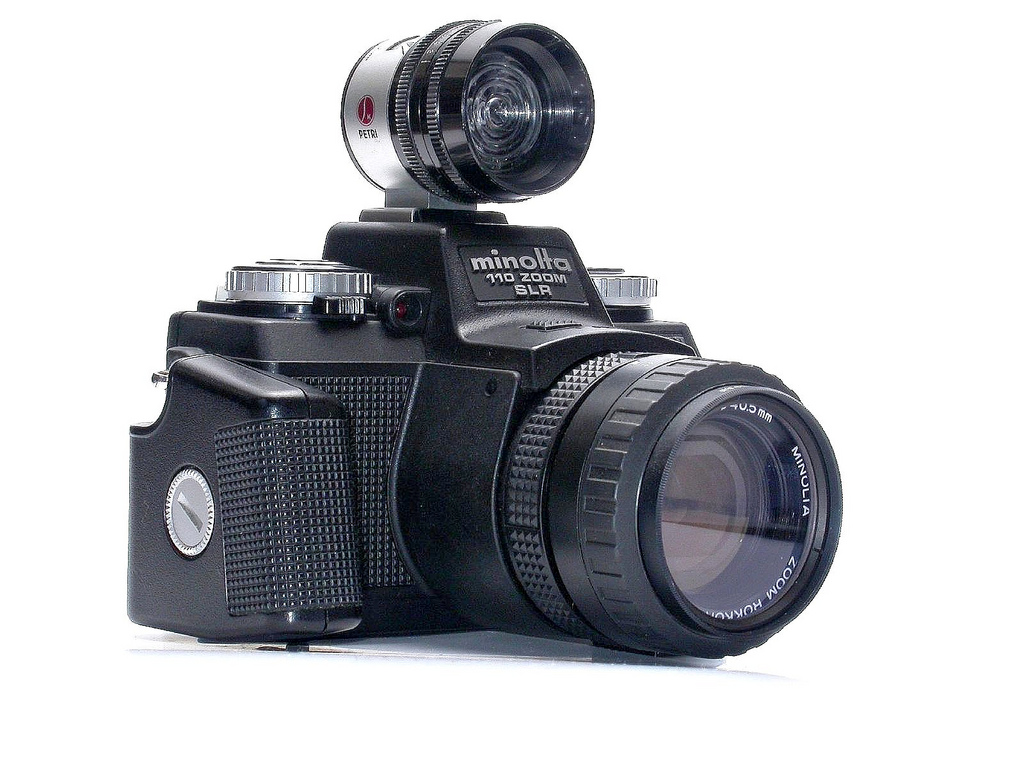 But both had a regular hot-shoe whereas the Auto 110 flashes were screw in. As you can see both have strengths and weaknesses but both are technological marvels. Check out the flickr group for some still faithfully using their auto 110 SLR’s. Minolta Zoom 110 also has a Flickr group, albeit a small one.